Petition by ASH and ATCA

Petition by Action on Smoking and Health 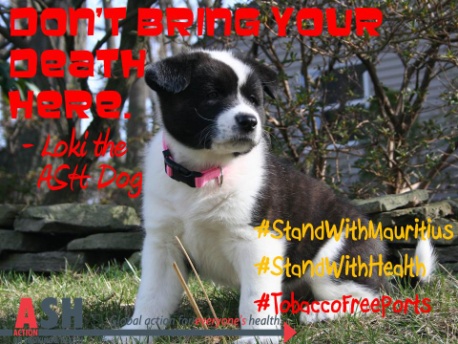 A major champion of the tobacco control community is at risk today – the African country of Mauritius. The citizens of Mauritius urgently need you toTAKE ACTION by signing this petition in support of maintaining their tobacco control laws amidst the impending threat of a tobacco company from Dubai seeking entry to the continent through their port.

Tobacco kills more than 6 million people around the world annually, and Africa is a prime target of the ever-expanding tobacco industry.  The industry wants consumption to increase on the continent as tobacco use is decreasing in developed nations. Already, 80% of tobacco-related deaths in the world occur in low- and middle-income countries. In Mauritius, tobacco use causes 1,000 deaths every year and accounts for 64% of deaths linked to cancers of the lungs, bronchus, and trachea.

Mauritius has made tremendous strides in tobacco control and is regarded as a model by many countries. It is the first country in the world to successfully ban tobacco industry corporate social responsibility schemes since 2008.  Mauritius was also one of the first countries to ratify the World Health Organization’s Framework Convention on Tobacco Control (WHO FCTC) in 2004, demonstrating its high-level of commitment to tobacco control and public health policy.

Today, Mauritians have reached out to ASH to help sound the alarm! An international tobacco company from Dubai has plans to setup a tobacco manufacturing plant in the free trade port of Mauritius to export tobacco throughout Africa.  This tobacco manufacturing plant proposal in Mauritius indicates a shift in policy, because tobacco industry interests are receiving greater consideration than public health.

The WHO FCTC states that there is a fundamental and irreconcilable conflict between the tobacco industry’s interests and public health policy interests.

This shift is frightening. Tobacco manufacturing plants in free trade ports are often used for illicit trade in tobacco products. The tobacco plant in Mauritius will make both legal and illicit cigarettes more accessible to and affordable for Africans. This will exacerbate the tobacco-related health, social, economic, and environmental problems of a continent already facing numerous challenges, including the double burden of communicable and non-communicable diseases.

Please help us tell the government of Mauritius to stand up for public health. “We need to garner international support against the tobacco industry’s project, and we need to move fast so that our voices reach the Prime Minister before he makes a decision on their proposal,” said Deowan Mohee, President of VISA, Mauritius.

United, we can confront the tobacco industry and stop their global infestation!

Sign your name here to stand up for a tobacco free port in Mauritius.