Since 1999, health warning labels on cigarette packs in Mauritius had only one text-based message that read: “GOVERNMENT WARNING: Smoking causes cancer, heart disease and bronchitis”, which appeared on the side of the pack. There were no requirements to set the warning apart from the packaging design, such as a thick black border and different-colored background. As a result, the warning was not noticeable, blending into the background of the pack design, as shown in Figure 1.
In line with Article 11 of the FCTC which stipulates that each Party shall adopt and implement effective packaging and labeling measures, in 2009, Mauritius introduced a set of eight pictorial health warnings. It was the first country in the African Region to implement pictorial health warning labels—a set of eight rotating images appearing on the front and the back of packs, in both English (occupying 70% of back) and French (occupying 60% of front). At the time of their introduction, these labels were among the largest in the world. Text messages also appear on 65% of the side of packs in both French and English.

The official date of implementation for the provisions related to packaging and labeling of tobacco products was June 1, 2009. However, the first pictorial warning labels were reported to be in public circulation on October 17, 2009.

The ITC Mauritius Wave 1 Survey (April to May, 2009) was conducted 5 to 6 months prior to the first circulation of pictorial health warnings. The Wave 2 (August to October, 2010) and Wave 3 (June to July, 2011) Surveys were conducted after the pictorial warnings had been in circulation for 10 to 11 months and 20 to 21 months, respectively, providing two post-implementation assessments of warning label effectiveness. The key findings of the assessments are as follows:

Impact of Warnings on Knowledge:

The ITC Wave 1 to Wave 3 Surveys (2009­2011) measured knowledge of six of the eight health effects that were addressed in the pictorial warnings (lung cancer in smokers, coronary heart disease, asthma in children caused by secondhand smoke, stroke, mouth cancer, and impotence). The Wave 2 Survey (2010) results showed that after the implementation of pictorial warnings, knowledge of these specific harms of tobacco use increased among smokers from between 1% to 19%. The Wave 2 (2010) and Wave 3 (2011) findings suggest that the largest increase in awareness of health effects occurred in the first 10 to 11 months after the labels were launched. Knowledge of impotence, and mouth cancer increased by only 3% between Wave 2 (2010) and Wave 3 (2011). Knowledge of other health effects decreased slightly – stroke and coronary heart

Impact of Warnings on Behaviour:The use of pictorial health warnings on cigarette packs has had an impact on smokers’ avoidance of health warnings, which serves as another indicator of their effectiveness.The percentage of smokers reporting that they had made an effort to avoid looking at or thinking about health warning labels nearly tripled—from 13% at Wave 1 (prior to the introduction of pictorial warnings) to 38% at Wave 2 (10 to 11 months after the introduction). This percentage then decreased to a considerable degree to 23% at Wave 3 (20 to 21 months after the introduction), showing evidence, possibly, of wear-out.

The introduction of pictorial warnings had an initial impact on changing smoking behaviour. Specifically, approximately one-quarter (22%) of smokers at Wave 1 (2009) reported that they gave up smoking a cigarette “at least once” because of text warning labels. After the introduction of pictorial warnings, this percentage increased to about one-third (30%) of smokers at Wave 2 (2010). However, at Wave 3 (2011), this percentage declined all the way back to 20%, at the level found at Wave 1 (2009), when only text warnings appeared on cigarette packs (Figure 12). On this measure of effectiveness, then, there was evidence of a wear-out effect.

However, there is evidence that the warning labels have begun to show a levelling off of effectiveness, and on some indicators of effectiveness, wear-out (declines in effectiveness): the majority of warning label effectiveness indicators showed either a decline or no further improvement between Wave 2 (2010) and Wave 3 (2011). In view of these findings, the Mauritius government’s initiative to introduce a new set of pictorial warnings is timely as it is important to rotate and refresh pictorial warnings frequently in order to mitigate potential wear-out effects over time. The need to revise health warnings is supported by many studies in health communication, and frequent revision of health warnings is suggested in the Article 11 Guidelines of the WHO FCTC. 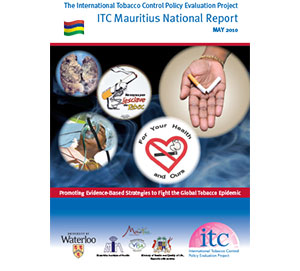 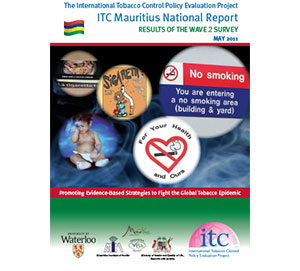 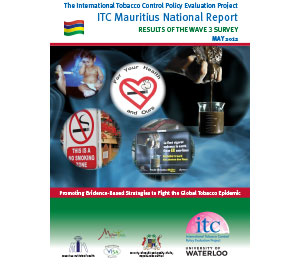