World No Tobacco Day 2022: Tobacco’s threat to our environment 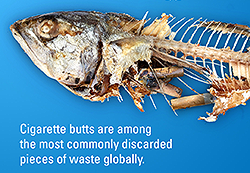 WHO and public health champions around the world are marking World No Tobacco Day (WNTD) this year by focusing on the many ways in which tobacco threatens the environment we live in.

The 2022 global campaign aims to raise public awareness about the environmental impact of the entire tobacco cycle, from its cultivation, production and distribution to the toxic waste it generates. The campaign will also aim to expose the tobacco industry’s effort to greenwash its reputation and to make its products more appealing by marketing them as environmentally friendly.

Tobacco use damaging at every stage

From start to finish, the tobacco life cycle is an overwhelmingly polluting and damaging process. Air pollution caused by smoking springs to mind, but damage occurs across the entire supply chain, and is much more complex.

Consumers have become more environmentally conscious and they are choosing more sustainable products. The tobacco corporations, among others, have made environmental sustainability an integral pillar of their corporate social responsibility (CSR) strategies and adopted several greenwashing practices. These include beach clean-ups and marketing new products as eco-friendly to divert public attention away from their own environmentally damaging actions.

The WNTD 2022 campaign calls on governments and policy-makers to step up legislation, including implementing and strengthening existing schemes to make producers responsible for the environmental and economic costs of dealing with tobacco waste products. WHO also recommends that countries fully ban tobacco advertising, promotion and sponsorship, including advertising CSR programmes, in accordance with the Framework Convention on Tobacco Control (WHO FCTC).